Established in 2014, HOTCUS Travel Awards support research in any area of twentieth century United States history by postgraduate and early career researchers. A full list of winners can be found here.

In 2015, Oenone Kubie (University of Oxford) was awarded a postgraduate award and spent two months in the US researching her project “Boys’ Street Culture in Chicago, 1900-1929”. She reflected: 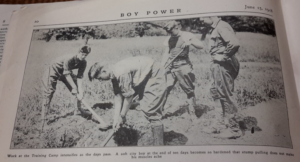 The majority of my stay was spent, as one might expect in the various archives in Chicago. There I found really promising material: from the papers of the Chicago School sociologists at the University of Chicago to photographs of boys playing around various settlement houses. I am particularly grateful to HOTCUS, however, as their generous support enabled me to extend my trip to include the Illinois State Archives at Springfield, Illinois.

This trip has undoubtedly aided my research and I would once again like to thank HOTCUS for helping make it possible. I’m excited to be back in the UK to see what I can make of the materials I have gathered and I hope to present some of these findings at a future HOTCUS conference.

In 2017, Jak Allen (University of Kent) won a postgraduate prize for his project “Cousins at Law: Civil Liberties under Learned and Augustus Hand, 1909-1961”:

Without the generous support of HOTCUS, this research would not have been possible. In the age of digitisation, the history of law still lags behind other historical fields when it comes to the online accessibility of primary sources and archival documents. The story of the Hands is an example in which its most important sources are confined to those lucky enough to reside in or visit the states of New York and Massachusetts. HOTCUS’ award thus enabled me to be one of those fortunate individuals.

I will now use the information and pictures I have obtained by transferring my knowledge to my research and many future conference papers. However, no words can justifiably describe my gratitude to HOTCUS for helping me undertake the most important research trip within my short academic career.