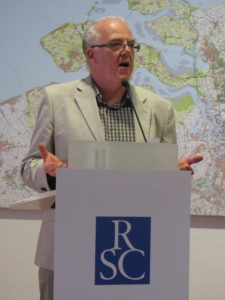 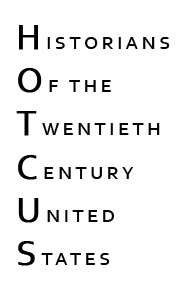 To the best of anyone’s recollection, HOTCUS dates its origins to late 2006, having condensed out of conversations that a number of modern US historians in the UK had with each other on the seminar and conference circuit that year. The field was experiencing an expansion in terms of both faculty appointments and graduate student recruitment. It now seemed large enough to support an organization of its own; the organization, in turn, might help convert the field into a distinct intellectual community, providing new opportunities for networking and for focused collective discussion of key themes in modern American history. Jonathan Bell (then at Reading) pointed to the precedent established by BrANCH, the British American Nineteenth Century Historians. The influence of the BrANCH example was indicated by tongue-in-cheek suggestions in early correspondence that the organization, if established, might be named TWIG or, failing that, TWITCH.

By early 2007, Axel Schäfer (then at Keele), Dan Scroop (then at Liverpool), Iwan Morgan (London), Kendrick Oliver (Southampton) and Jonathan Bell had agreed to take the idea on together. At an initial planning session in January, arrangements were made to gather the names of all those working in the field of twentieth-century US history in Britain and invite them to an exploratory meeting in London on 5 June. Twenty-four people attended the London meeting. The morning was spent discussing the current state of the field, with presentations from Michael Heale (Lancaster), Andrew Preston (Cambridge) and Vivien Miller (Nottingham). The focus of the afternoon was the purpose and shape of the prospective organization. The discussion concluded that it should have a formal structure, with a steering committee and membership list; fees would be modest to ensure wide participation, especially from postgraduate students. In addition to the original five, Eleanor Thompson (Oxford) and George Conyne (Kent) were elected to the committee, with Iwan Morgan serving as chair (pictured at the 2012 conference at the Roosevelt Study Center, Middelberg). It was also agreed that the new organization should immediately establish good working relationships with BrANCH, the British Association for American Studies (BAAS) and the American Politics Group (APG). The organization’s first conference was scheduled for June 2008.

Soon afterwards, the organization was officially christened Historians of the Twentieth Century United States, a name chosen at least in part because it supported a memorable acronym (a committee minute does primly observe that only the organization’s full title was to be used in official correspondence). Over the course of the next year, HOTCUS also adopted a constitution (composed with Madisonian skill by Eleanor Thompson), received generous seed funding from the Institute for the Study of the Americas (University of London), the David Bruce Centre for American Studies at Keele University, and the Mellon Fund, University of Cambridge, and held its inaugural conference in London, with 26 speakers on the two-day programme and Professor Tony Badger from Cambridge delivering the keynote address. By that point, membership stood at 44. Once little more than a TWIG, HOTCUS was starting to sink roots into the soil and grow….

If you would like to make a donation to support the future of HOTCUS, please use the link below.